Make a donation to Comic Relief

Tim on the BBC 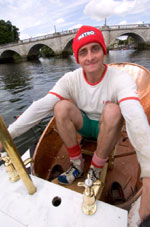 July 10th is Sport Relief 2004. For this, the same team that created the Paper Boat challenge have come up with another water based charity fundraiser. The aim this year is to raise even more money and profile for the charity than last year.

Having conquered 160 miles of the River Thames in a Paper Boat, breaking a world record that had stood for 383 years for Comic Relief, award winning comedian and writer Tim FitzHigham, another implausible craft and a large expanse of water are back.

Tim has again teamed up with Metro and already backing and advising the project are Mulberry Marine, the Royal Naval Reserve, RNLI, one of the world's leading boat designers, the country's leading boat maker, the Coast Guard, Harbourmasters, Company of Watermen and Lightermen of the River Thames, one of the City of London Aldermen, the Port of London and a Lama Farmer from Kent.

This year for Sport Relief and Tim plans to row from France to Tower Bridge in a Thomas Crapper Bath. This has never been tried before, Tim says there is a good reason for this, and should he make it it will be another world first.

The bath was built by Mark Edwards of Richmond Bridge Boathouses who also built the Royal Shallop (type of boat) Jubilee and the Oxford and Cambridge fixed seat rowing boats that are due to carry the Olympic torch. The bath was designed by multi-award winning designer Douglas Hynd (senior designer at Redman Whitley Dixon) and Tim on the back of an envelope after some pints down the pub. The bath taps and shower are supplied and designed by Thomas Crapper and Co. Ltd and the boat was launched by Thomas Crapper himself (great grandson of the original). Tim has known Tom since Tim was four and Tom was a bit older (which he still is).

The bath has been named, in conjunction with the Palace, Lilibet II in honour of Her Majesty the Queen (The Queen's name when she was young).

The planned 130 mile row, starting on the French coast, is expected to take seven days and will take Tim and his bath to Dover, round the coast of Kent via the Isle of Sheppey (and fingers crossed a game of cricket) and up into the Thames. He will use a plan devised by the Romans to use the tidal water and get up to London. This plan has never failed in the last 2000 years. This plan has been used once in the last 2000 years.

His journey will end at Tower Bridge in London, unless he's been swept up to Iceland by then. All the way he will be accompanied by the Mary Mayne, kindly supplied by Mulberry Marine, and a representative of the Channel Crossing Association to check he doesn't cheat. His finish line is Tower Bridge BUT as sport relief is all about going the extra mile, after coming under Tower Bridge he will row the extra nautical mile up to Blackfriars bridge to finish the trip at an event aboard HMS President.

The final details will follow very soon but for now HMS President is a boat on the river, and on the night it'll be the one with all the red bunting and sport relief socks flying that it can muster.

All the money raised from this ground breaking voyage will go directly to the charity Sport Relief (Comic Relief's fit younger sister) who work everywhere from Dalsden to Dehli using sport to help break down barriers and provide a better standard of life for people who really need it.